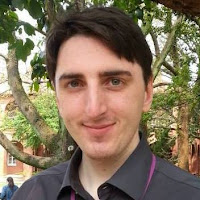 The Computer Art Club aims to introduce beginners and young learners to free digital art software. In addition to teaching in English speaking countries, Benjamin has also taught in Germany, Japan and Taiwan. As such the tutorials were created with non native speakers in mind. Everything is written in simple English, because learning to create computer art is already difficult enough! However, it is hoped that English learners can develop their English as well as their computer art skills.

Although Benjamin was born in England, he has also lived in Ireland, Germany, and Japan. He can also speak German and simple Japanese, so feel free to send him a message, and he will do his best to help you!
Home
Subscribe to: Posts (Atom)