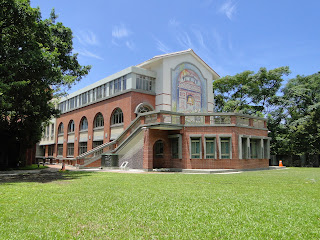 
The Octagonal tower was built in 1923 .It was build by Dr.George William Mackay.

Its walls are red and white bricks. It is shaped like an octagon.

That is a merge of Chinese and Western style building. And many visitors always take picture with the tower.

It was built in 1965. It was ever the biggest church in Taiwan.

It can accommodate 1500 people. It is surrounded by trees. And everyone likes it.

And we had lots of fun time in this church like Christmas celebration and the English singing competitions.

This Christmas tree is the tallest tree in Taiwan. When it is around December 25 we will light up the Christmas tree with colorful lights and decorations.

But now the tree is sick, so we need to protect it.

Maybe next year in December, we can take pictures for you to the tallest and the most beautiful Tree in Taiwan.

The bell is right beside the tree. It rings at 8 o’clock in the morning and 5 o’colck in the afternoon.

And sometimes we use it for special days like sports day, graduation day and so on.

It was made in 2004 and it still makes a lovely sound that can be heard from afar.

In 1923, an English teacher called Chen set up a football team. So this place is the birth place of Taiwanese football.

From that day forward we have always been the champions.

Many schools came to play rugby on our rugby field.

The Kindergarten was built by a Canada missionary called George MacKay.

It was completed in 1937. It was the first kindergarten in the northern of Taiwan.

And many of us graduated from this beautiful kindergarten.

It was built in 2001. It is a place for aboriginal people to stay in.

This kind of design was from the southern of Taiwan in PingTun.

And next to it is our TamKang history house. It was built in 1910 and many tourists visit it. Inside the house displays TamKang high school’s history and traditions.

Before the restaurant is the dormitory of Miss Isabel Taylor. It has a nick name called White House.

Isabel Taylor went home in 1973 and no one has lived there.

The garden was created for MacKay’s wife and it’s very beautiful. There are many species of flowers. And when you walk through the

garden, you will smell roses.

Sun-Tek built this garden this year and also celebrate out school 10-year-old birthday.

It was the first women’s school in Taiwan. It was built in the year 1916.

It’s an important and beautiful building in Taiwan and we are so excited that we can study in it.